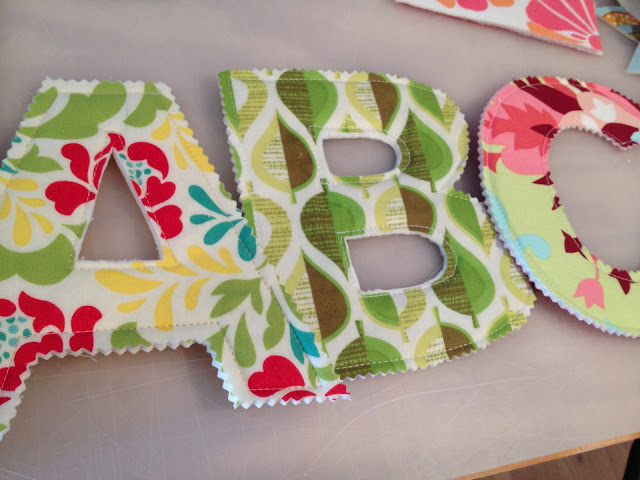 Hi friends!  I am super excited to show you what i have been working on all week.  I just finished this adorable fabric alphabet, and i’d love to share with you how i did it so you can make a set for your munchkins. I was inspired by THIS pin on pinterest, which doesn’t go to a site or tutorial when you click on it, just a fun picture. So i decided i could figure it out on my own with the photo as inspiration. I did it using my silhouette Cameo, however i’m sure you could use good old stencils and cut them out yourself if you so wished.
The first step was to gather the fabric.  I wanted my letters to be big so i cut pieces of fabric to 8″x10″.  This project was super inexpensive for me because i’m a fabric hoarder, and literally all of the fabric came from my scrap tub. Yes i have enough fabric in my “scrap” bin to make 26 double sided 8×10″ letters. i have a problem.  I didn’t worry about them matching, i think they turned out cute together, but it wasn’t like all the fabric was from one collection or anything. 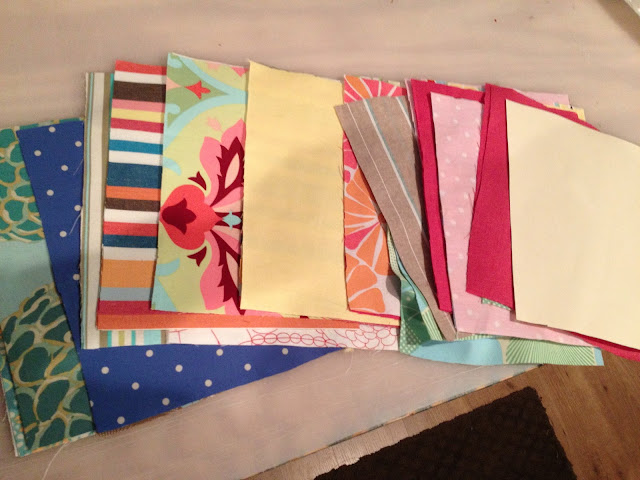 Step Two was to cut out the heat bond. I used 2 rolls of permanent heat bond which i bought at walmart, that is the only thing i actually purchased.  After i cut out my heat bond squares i ironed them on to my fabric squares and then i loaded them one by one into the cameo to cut.  (Did i mention this is not a fast project)  I used Arial Black font because i wanted the letters to be thick so they would be substantial enough to be played with by little hands, and be recognizable by my 2 year old who knows his letters, but might be confused by a pretty font. I cut each letter twice- once the normal way and the second a mirrored version of it for the back. 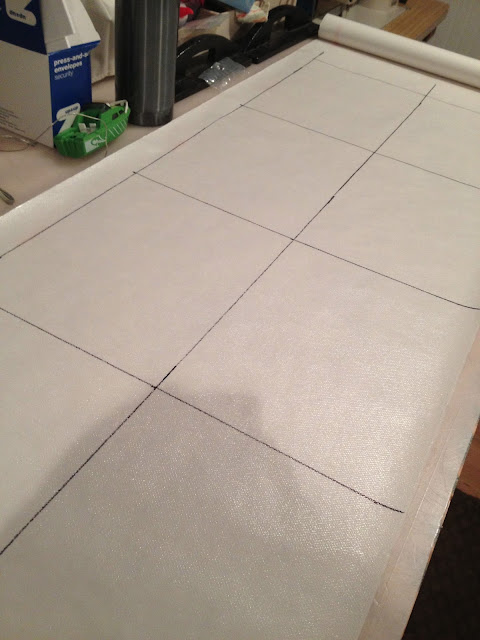 After all the letters were cut out i then ironed them onto batting and cut them out.  The picture below is when they were all ironed on to a piece of batting.  Once i cut them out of the batting i pinned each letter to its corresponding mirrored letter, if that makes sense.  So i pinned the front F and the back F together so they were one letter and then sewed around the edges.  I realized that this project would have been much easier to just use one piece of batting and then iron both sides of the letter onto either side, that way you wouldn’t be sewing anything together.  However the batting i had wasn’t super thick so i opted to use two layers of it.  I sewed at a 1/4″ seam allowance and then took pinking shears to the edges afterward. 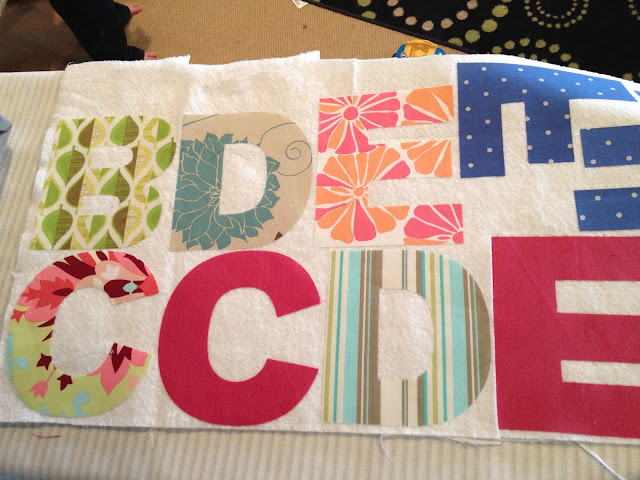 I just love how they turned out!  Max has already enjoyed playing with them, and June thinks they are great teething toys. 🙂 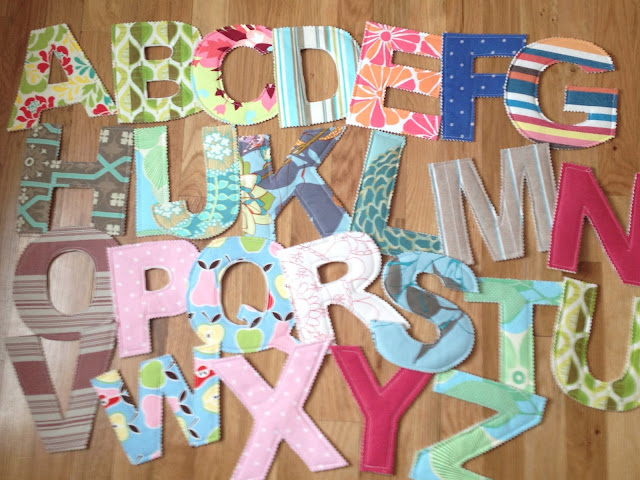 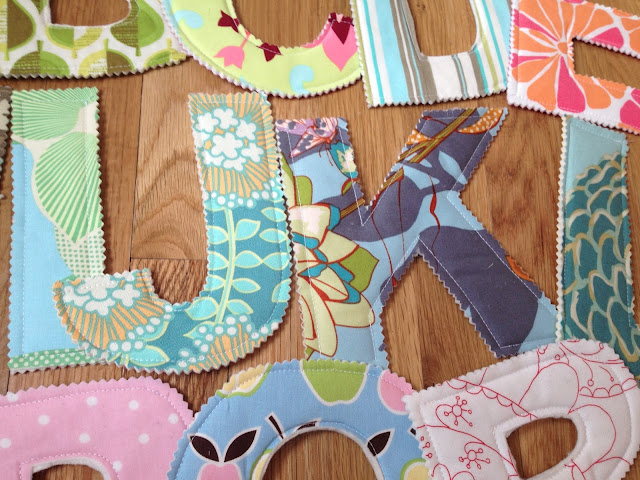 Just so you can see the actual size i put a marker next to the A. 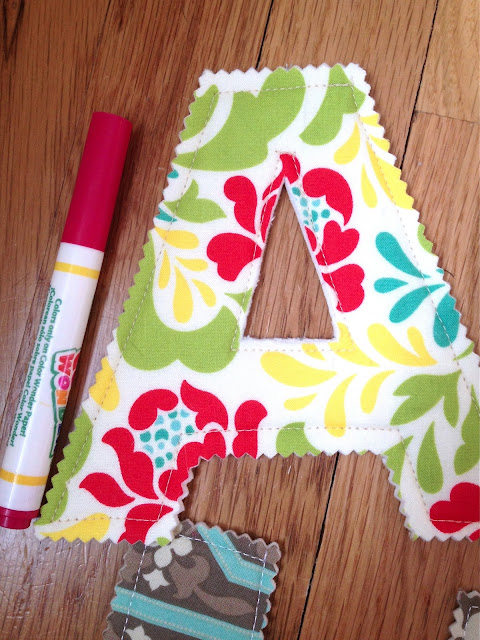 And now their “home” is in this cute chicken wire basket. I love a finished project, don’t you?! 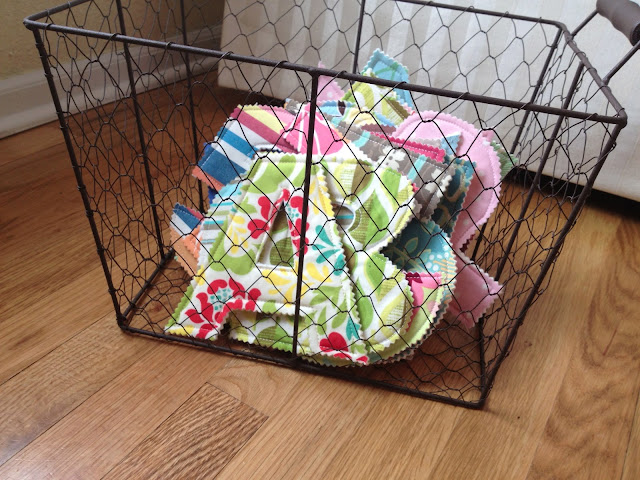